The temperature, concentration, pressure of reacting gases, surface area of reacting solids, and the use of catalysts, are all factors which affect the rate of a reaction.

There are two ways to find the rate of a reaction:

The measurement itself depends on the nature of the reactant or product: 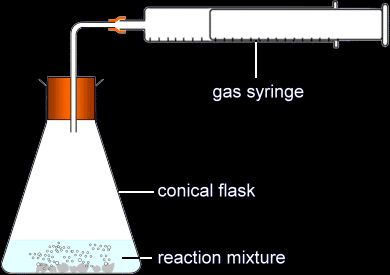 Measuring the production of a gas using a gas syringe

It is usual to record the mass or total volume at regular intervals and plot a graph. The readings go on the vertical axis, and the time goes on the horizontal axis.

You will be expected to remember the factors that affect the rate of reactions, and to plot or interpret graphs from rate experiments.

How to increase the rate of a reaction:

The rate of a reaction increases if: 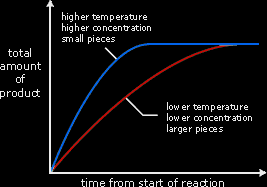 You will be expected to explain, in terms of particles and their collisions, why changing the conditions of a reaction changes its rate.

For a chemical reaction to occur, the reactant particles must collide. Collisions with too little energy do not produce a reaction.

If the concentration of a dissolved reactant is increased, or the pressure of a reacting gas is increased:

If a solid reactant is broken into small pieces or ground into a powder:

If the temperature is increased:

Catalysts are important in industry because they reduce costs.