Electrolysis is a process of breaking down a compound by electricity. An electric current is the flow of charged particles.

The electrolysis cell is a battery each pole connected to an electrode and both electrodes are dipped in the liquid to be electrolysed.

Electrolysis separates an ionic compound back to the elements that form it. For example by electrolysis we can obtain sodium and chlorine from sodium chloride.

The electrons are transferred from the anode to the cathode through the wires.

The electrolyte is an ionic compound either in its molten or aqueous form. Ionic compounds conduct electricity only when they are in these forms because they contain free mobile ions which can carry the current but they don’t in solid form.

This example explains why the process is called electrolysis. The suffix -lysis comes from the Greek stem meaning to loosen or split up. Electrolysis literally uses an electric current to split a compound into its elements.

If the other negative ion is a halide, there are two probabilities:

The ions present in the electrolyte are H+ and OH-  from water and Na+ and Cl-  from sodium chloride.

Since sodium is more reactive than hydrogen, the H+ ions will be discharged at the cathode and hydrogen gas will evolve. And because the solution is concentrated, Cl- will be discharged and chlorine gas will evolve. But keep in mind that chlorine is soluble in water, it would take time for it to evolve and some oxygen can be formed too. Gases should be collected in an inverted measuring cylinder.

This leaves us with two other ions, Na+ and OH-. They bond together forming sodium hydroxide which is an alkali and extracted later.

At the cathode: 2H+ + 2e- → H2
Hydrogen gas evolves. Observation is bubbles of colorless gas.
Test to make sure by approaching a lighted splint, if positive it will burn with a pop sound.

At the anode: 2Cl- - 2e- → Cl2
Chlorine gas evolves. Observation is bubbles of green gas. Test to make sure by approaching a damp blue litmus paper, if positive it will turn red then bleach.

Electrolysing Brine in a Membrane Cell:

In order to obtain the purest products possible, a membrane cell like the one below is used. 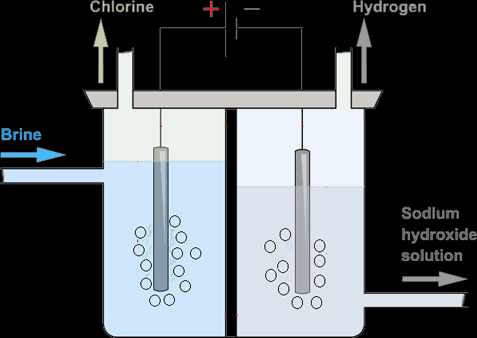 Ions present in the electrolyte are H+ and OH- from water and Cu+2 and SO4- from copper(ii) sulfate.

At the Cathode: 4OH- - 4e- → O2 + 2H2O
Oxygen from OH- ions is formed. Bubbles of colorless gas are formed. To test for oxygen, approach a glowing splint, if positive it relights.

At the anode: Cu+2 + 2e- → Cu
Cu+2 are discharged because copper is less reactive than hydrogen. A red brown metal is formed.

This leaves us with H+ and SO4- ions which bond together forming sulfuric acid.

Electrolysis can be used to refine metals. For example if we have a sample of impure copper that we want to refine, we set up a unique electrolysis cell to do that.

Electroplating is covering a metal object with another metal by electrolysis.

Purposes of electroplating are:

The idea of the electroplating cell is very similar to that of refining:

When the current is turned on, the atoms of the metal of the anode will become ions and fall into the solution. The electrons are transferred from the anode to the cathode in the outer circuit. When electrons reach the cathode, the metal ions in the electrolyte get attracted to the surface of the object covering it completely, thus it gets electroplated.

If we want to electroplate a steel fork with silver: 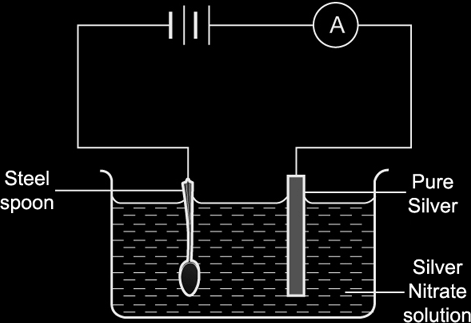 A simple cell is a system that converts chemical energy into electrical energy. A simple cell is made of two metals (electrodes), one more reactive than the other, connected together by a wire and dipped in an electrolyte. If a light bulb is inserted between the two electrodes, it will light up.

The bulb stops glowing when H+ ions are finished or when the anode is used up.