The blood is a fluid consisting of several types of cells floating in a liquid called plasma.

Red blood cells are fully adapted to their function by the following characteristics:

Platelets are tiny cell fragments that prevent bleeding when the skin is cut, and stops bacteria from entering our systems through the wound. This works by blood clotting, when the skin is cut, some reactions take place that results in platelets producing a protein, this protein will change the fibrinogen (another soluble protein in the plasma) to insoluble fibrin. The fibrin forms long fibres that clot together blocking the cut, thus preventing any bleeding, this is called blood clotting.

This makes up most of the blood. It is mostly water with some substances dissolved in it, these include carbon dioxide, hormones, food nutrients, urea and other waste products. The blood plasma transports substances from one place to another.

Functions of the blood:

This is a number tubes carrying blood away from and to the heart and other organs. The main types are Arteries, Veins and Capillaries.

The structure is simple, beside the narrow lumen, the arteries have a strong thick wall to withstand the pressure. Their walls are also elastic and stretchable.

Brief description of characteristics of arteries:

Their function is to transport blood to the heart from the body.

The veins always always have a low blood pressure because by the time the blood with high pressure reaches the veins, it loses most of the pressure. This means that blood flows very slowly in veins, to help this, veins lie between muscles so that the blood is squeezed when the muscles contract.

They have a simple structure. Because they have a low pressure, they don’t need strong, thick walls like the artery, instead they have thin less elastic walls. Their lumen is much wider too. Veins have a unique feature, that is valves. Because blood in veins flows slowly with a low pressure, there is a risk of a backflow, specially in veins that move blood upwards against gravity, like the ones in the leg. The valves ensure that the blood is always flowing in the direction of the heart. When the muscles squeeze the blood, the valves are open the let blood through, when muscles relax, valves close to prevent a backflow. 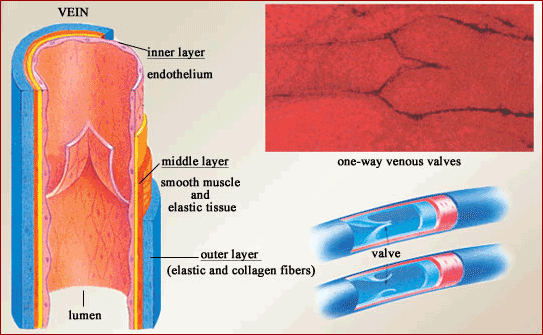 Brief description of characteristics of veins: 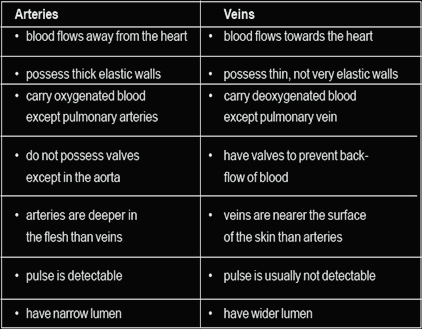 Blood capillaries are very we

ll adapted to their jobs. They are one cell thick to reduce the diffusion distance of materials for faster diffusion. They also have pores in their walls between the cells, to allow the plasma to get out of the blood and become tissue fluid.

The heart is a pumping organ that is responsible for the movement of blood around the body. The function of the heart is to give the blood a push, keeping it flowing around the body all the time. That is why the heart is constantly working, if it stops for a minute, the other organs will not receive any oxygen or nutrients, thus the body fails and the person dies. The heart is located in the chest, the thoriac cavity between both lungs.

Mechanism of the heart: 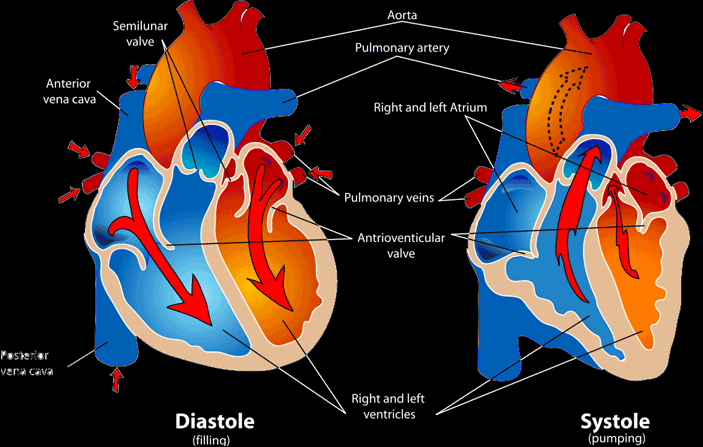 If you listen to your heartbeat, you will hear two sounds, one low and one high. These are results of the systole and diastole. They are the sounds of the cardiac valves opening and shutting.

So to protect yourself from CHD you need to avoid diets full of fats and salts, avoid smoking, try to be less stressed out, and exercise regularly.

Tissue fluid is a fluid surrounding the cells of a tissue. It supplies them with all their needs of oxygen and nutrients, and takes away all their waste products including carbon dioxide. Tissue fluid plays a very big role in substance exchange between blood and cells.

Plasma from the blood capillaries move to the tissue through gaps in the walls. They become tissue fluid. They exchange their content of oxygen and nutrients with the cells and take carbon dioxide and waste products. At the end of the capillary bed, the tissue fluid leaks back into the blood, and becomes plasma again, but not all of it. A little of it is absorbed by the lymphatic vessel and becomes lymph. The lymphatic vessel takes the lymph to the blood stream by secreting them in a vein near the heart, called subclavian vein. The lymph in the lymphatic vessels are moved along by the squeeze of muscles against the vessel, just like some veins. 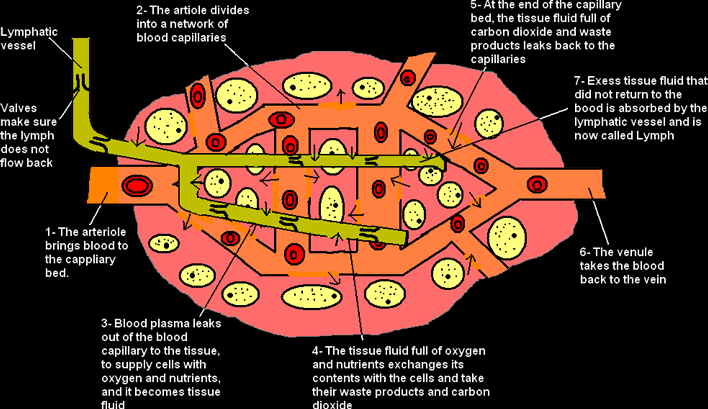 The lymphatic system plays a big role in the protection against disease. It produces the white blood cells lymphocytes. Which kill any cell with a different antigens than the ones in your body cells. So if bacteria get into your body, your lymphocytes quickly recognise them as foreigners and will divide and kill them.

Lymphocytes are considered a problem when it comes to organs transplant. For example if someone (recipient) with renal failure receives a kidney from another person (the donor), the cells of the kidney will have different antigens than the other cells in the patient’s body. The lymphocytes will consider the cells of the kidney an enemy and start attacking it, this is called tissue rejection. Organ transplant is perfect in one case, this is when the donor and the recipient are identical twins, because the antigens of their cells perfectly match. In other cases the recipient is given immunosuppressant drugs to actually weaken their immune system to prevent tissue rejection.

Brief Summary Of Functions Of The Lymphatic System: