Plants are living organisms, they need food in order to keep living. The way they obtain their nutrients however, is completely different than that of ours. Plant make most of their nutrients by them selves, they just need 2 raw materials, these water and carbon dioxide.

The leaf of a plant is considered the kitchen of it. It is where food is made, later on you will see how the leaf is adapted to making food. 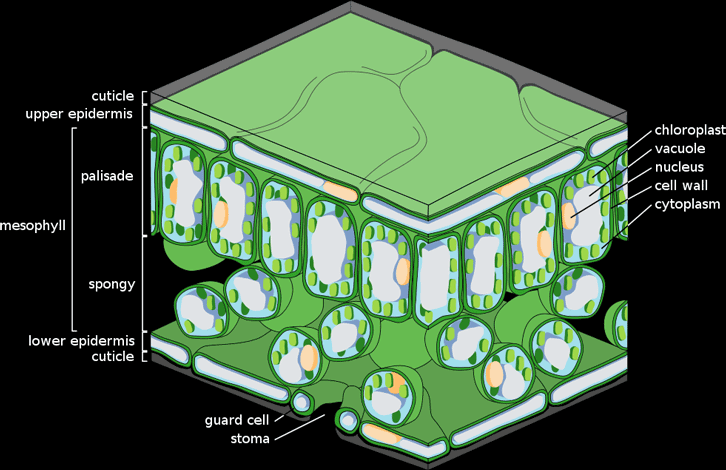 Upper Epidermis: it is a layer of cells that cover the leaf and protect it, it is covered by a layer of wax called cuticle.

Overall equation for the Photosynthesis

The water is absorbed by the roots of the plants, then they are transported upwards through a hollow tube called the xylem vessel, till it reaches the leaf where photosynthesis takes place, it enters the leaf through holes in the xylem. Excess water leaves the cell through the stomata, this is called “transpiration”

The leaves are always exposed to sunlight at daytime. The sun penetrates the transparent layers on the leaf till it reaches the mesophyll layer, where photosynthesis take place. Palisade cells are nearer to the surface of the leaf than the spongy cells, so they receive more of the light and make more photosynthesis.

Factors Affecting The Rate Of Photosynthesis:

At night, the plant performs several process to convert the stored starch into many useful nutrients like:

At daytime, the guard cells open the stomata to allow gaseous exchange, this occurs according to the following steps:

At night however, the mechanism is opposite:

The plant is also in need for mineral ions to control chemical activities, grow, and produce materials. The most important minerals are:

Both mineral ions are absorbed from the soil.