Carbohydrates, proteins, fats and vitamins are all organic substances. This means that they are made by living organisms (plants) and contain carbon atoms in their structures. Plants make organic substances from inorganic materials like carbon dioxide, water and inorganic minerals. Animals are unable to do this.

This nutrient is an organic compound composed of carbon, hydrogen and oxygen.

It is used as an energy resource, essential in respiration to release energy.
It is used in creating the cellulose, the substance forming cell walls of plant cells.

Monosaccharide and Disaccharides are sugars, they are reducing for Benedict’s reagent, except for the disaccharide sucrose, it is non-reducing.

These are composed of carbon, hydrogen and oxygen. But their ratios are different than that of carbohydrates. One fat molecule is made of a glycerol unit and three molecules of fatty acids. 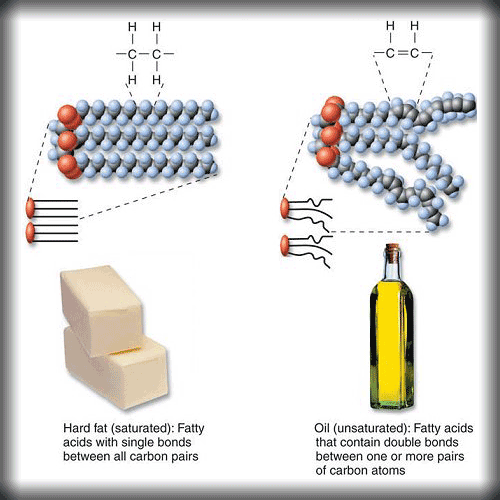 Fats are essential in a diet because they are needed to:

When fats are respired, they produce about twice as much energy as carbohydrates.

These are also organic compounds; they contain the elements Carbon, Hydrogen, Oxygen, Nitrogen and sometimes Phosphorus or Sulfur.
A molecule of protein is a long chain of simpler units called amino acids. 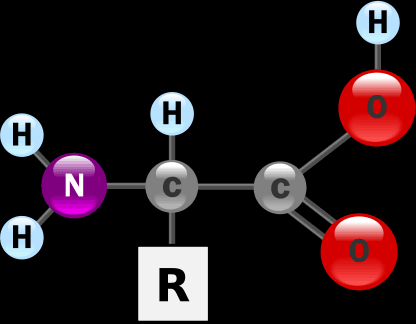 These amino acids are linked together by what's called “peptide bond”.

Although proteins are needed in high amounts, the body will only absorb as much as needed, so excess protein is delaminated in the liver and excreted as urea.

These are a lot of types, each needed in small quantities. Iron and Calcium are the most important minerals, and they are needed in higher amounts.

Although roughages are not even absorbed by the body, they are a very important nutrient in our diet. Roughages are mostly cellulose, which is the substance that makes up the cell walls of plants we eat. We humans, have no enzyme that could digest cellulose, that means that roughages enter the body from the mouth, go through the digestive system, and out through the anus unchanged. But as it goes through the digestive system, roughages take space in the gut to give the gut muscles something to push against, this process of pushing the food through the gut is called peristalsis, without roughages peristalsis is very slow and weak. Quick and strong peristalsis means that food stays in the alimentary canal for a shorter period, this prevents harmful chemicals of certain foods from changing the DNA of cells of the alimentary canal causing cancer, so roughages also helps stay away from cancer. Roughages are found in leafy vegetables.

Starvationis a severe reduction in vitamin, nutrient and energy intake. It is the most extreme form of malnutrition. In humans, prolonged starvation can cause permanent organ damage and eventually, death. The term inanition refers to the symptoms and effects of starvation. In case of starvation the body tends to feed on its own self. When the glucose level is decreased in the body, the liver breaks down fats to respire for energy, when the body is out of fats, it starts respiring proteins from the muscles to release energy.

is the opposite of starvation. It is eating too much of every nutrient, especially carbohydrates and fats. Obesity doesn’t strike alone, it brings with it several other diseases such as high blood pressure, cardiac diseases, diabetes, stress on joints and bones as well as other psychological issues like low self esteem and lack of confidence. To prevent obesity, you have to control your carbohydrates and fats intake and exercise regularly.

Another consequence of malnutrition is deficiency diseases.
These are results of a certain nutrient in the diet:

There are certain types of people whose diets need to be different to normal ones.
Such as pregnant women, breast-feeding women or children going through puberty.

Lactation means the production of breast milk. After pregnancy, the mother breast-feeds the baby for about 6 months or more. Breast milk needs to be high in Proteins, Calcium, and Vitamins to guarantee a healthy growth for the infant.

At some point, each child gets a growing spurt. This is a very high growth rate that increases the child’s size and mass in a short period of time. A growing child’s diet needs extra Proteins to develop cells and enzymes because their metabolic rate is higher, Calcium and Vitamin D to develop bones and Iron to make hemoglobin.

These are chemical compounded added to foods by the manufacturer because they have some benefits such as increasing the lifespan, prevent rotting etc.
Most food additives are good, such as ones that add colors or flavors to foods. But there are others which have been proven hazardous to humans.

Good food additives include flavorings and colorings which are used to make the food more appealing, antioxidants which prevent foods from combining with oxygen and rot, and stabilizers which stops foods like ice-cream from separating into water and fatty components.

Food preservatives though, are a widely used food additives which increase the lifespan of foods, making it cheaper to store and transport. However, scientists claim that some preservatives contain nitrites which combine with chemicals making a substance (nitrosamines) that causes cancer in animals.

Advantages of mycoproteins are that it is cheaper than any source of protein but equal in value, and that it contains much less fats and more roughages and carbohydrates

Note: This test is only applicable on all sugars (monosaccharide and disaccharide) EXCEPT FOR SUCROSE.

Note: Biuret Reagent is blue in colour and made of copper sulphate and a small amount of sodium hydroxide.