Movement In And Out Of Cells

Substance move in and out of cells by three ways:

Diffusion is the process by which oxygen enters the blood from the lungs, and by which carbon dioxide enters the leaf from the atmosphere. There are many more examples of diffusion in biology.

Diffusion always takes place down a concentration gradient, that means that the particles that diffuse try to spread evenly in all spaces, so it moves from where it’s very concentrated to where it’s not concentrated.

There are some factors affecting the rate of diffusion, like the steepness of the concentration gradient. The steeper the gradient the faster the particles diffuse. 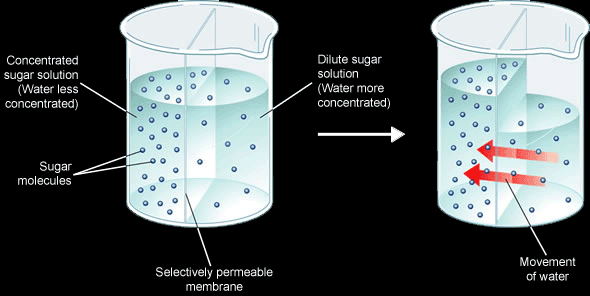 If we place a plant cell in a concentrated salt solution whith low water potential, water will move from the cell to the solution causing the cell to become plasmolysed as in the diagram.

Active transport happens in roots to absorb mineral salts from the soil. It also occurs in the digestive system of mammals.

If oxygen is absent, respiration won’t take place, active transport will stop. Molecules are taken into the cell by protein carriers within the cell membrane.