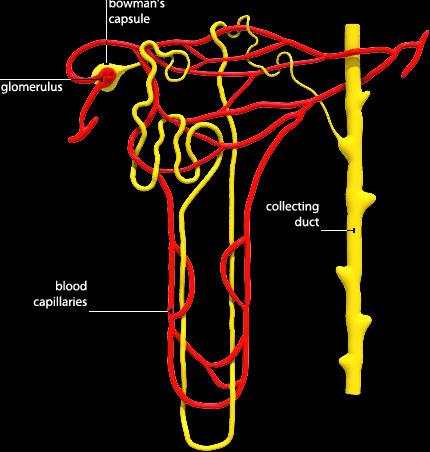 Mechanism of the Kidneys:

The blood in the renal artery contains large amounts of urea, glucose, water, mineral ions and some amino acids. When it reaches the glomerulus, the high pressure of the blood and the concentration gradient of these materials between the blood and the nephrone cause most of these substances to diffuse from the blood to the bowman’s capsule and become content of the nephrone, which is called glomerular filtrate (glomerular filtrate is a mixture of urea, water, glucose and mineral ions that diffused from the blood to the nephrone).

The glomerular filtrate moves in the nephrone till it reaches the loop of henle, which is surrounded by a dense network of blood capillaries of the renal vein. Here there is a concentration gradient of the content of the content of nephrone between the nephrone and blood. Both diffusion and active transport occur to ensure the complete reabsorption of valuable substances from the glomerular filtrate back to the blood; these substances are glucose and amino acids. Some water also moves by osmosis to the blood, as well as minerals.

That leaves urea, excess water and minerals to continue in the nephrone till it reaches the collecting duct and the pelvis. This mixture is called urine. Urine is transported from the pelvis to the urinary bladder by the ureters. It is them secreted out of the body through the urethra.