Classification is the sorting out of living organisms according to common features.

Species: A group of living organisms having the same characters and can breed together successfully producing a fertile offspring.

As we go down the classificatory system, organisms number decrease. The system can be memorized by

the word “KPCOF” but don’t forget get adding genus and species at the end.

However, we don’t just write names as we do usually, there are certain rules that must be followed to write the Latin name:

For example, we humans belong to the genus Homo and our species is sapiens. So the correct scientific name of humans is Homo sapiens, Or H. sapiens for short.
Other examples:

Viruses are not classified into a kingdom because it is not considered a living organism because it cannot reproduce on its own.

They are very small and measured in nm (nanometers), they could only be seen through an electronic microscope.

A Virus has a protein coat around it, and genetic material inside it (RNA or DNA). 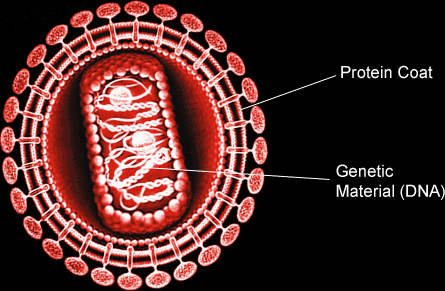 Viruses are not considered a living organism because they don’t have any of the seven characteristics, except that they reproduce by replication, but that only happens inside the host cell. 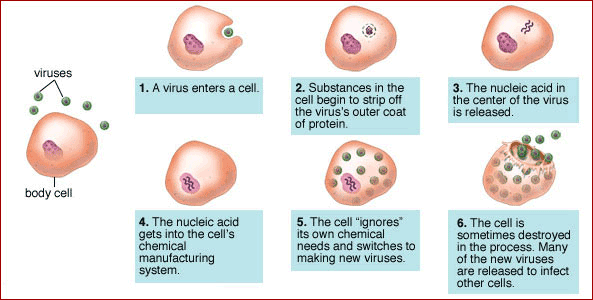 A bacterium is a single-celled organism that lives everywhere on earth. It can only be seen by a microscope 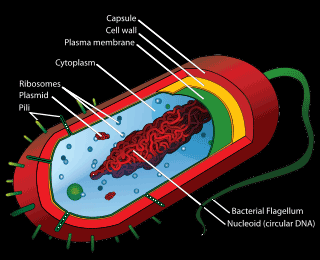 Cell Wall: It’s made of a substance called peptidoglycan, which contains glycogen and sugars.

Cell Membrane: It protects the bacterium from bursting when too much water is present and gives it its shape.

Cytoplasm: It’s where the chromosomes are kept and it stores granules of various materials.

Chromosome: A single DNA strand coiled up, it contains the bacterium’s genes.

Slime Capsule: This is an extra feature that is not present in all bacteria, it is created by the bacterium when the external conditions are not favourable.

Flagellum: This is an extra feature that is not present in all bacteria, it helps in moving and swimming.

Bacteria have managed to adapt its self in order to survive in various conditions. They obtain their food by various methods:

There are three types of heterotrophic bacteria, these are:

Saprophytic Bacteria: They secret enzymes which digest dead organic matter to simple soluble substances which the bacterium feeds on, thus causing Decomposition.
Mutualistic Bacteria: These live on the roots of plants, they use Nitrogen in the airspaces between the soil to convert it to nitrate ions which they feed on.
Pathogenic Bacteria: These are parasites, they cause diseases to plants and animals.

Some bacteria has a flagellum which is very useful for movement and swimming.

Some bacteria respire aerobically while others respire anaerobically.

Fungi are Multicellular organisms, except for yeast which is a unicellular fungus. Some fungi are not made of cells, but rather of microscopic threads called hyphae.

There are two types of hyphae:

Hyphae are tube like, microscopic structure,  it contains a cytoplasm which contains glycogen granules, and several nuclei. It doesn’t contain chloroplasts neither starch granules. In the center there is a vacuole, and the hyphae is surrounded by a hyphae wall which is sometimes made of chitin. Large numbers of hyphae grow together through whatever the fungus is feeding on making a branching network called mycelium.

How Do Fungi Eat ?
Fungi use a process called saprotrophic nutrition to feed its self. The hyphae secretes enzymes which digests dead organic matter or animal waste which is then absorbed by the hyphae to be used by the fungi.

Reproduction Of Fungi
At some point the fungi produce a reproductive structure, mushrooms for example, which produces thousands of tiny spores, these are then dispersed to other areas and grow into a new mycelium.

Adaptations Of Fungi
Fungi are adapted to perform their functions easily by the following ways:
They grow long mycelium of hyphae on whatever they feed on, these secret enzymes which digests what the fungi feeds on.
They are able to grow tall mushrooms of toadstools so the spores could be widely dispersed by wind or insects, thus they reproduce quickly.

Why Fungi Are Not Plants:
Long ago, fungi were classified as plants, but in details, fungi are actually different to plants, firstly, they do not contain chloroplasts and they do not undergo photosynthesis. Secondly, Their cell walls
(hyphae walls) are made of chitin not cellulose as in plants. Thirdly, their extra supplies of sugar is stored as glycogen not starch. And lastly, they are heterotrophic eaters not autotrophic like plants.

Plants are multicellular organisms. The main difference between them and other organisms is they feed using photosynthesis, which is a process which involves making sugars out of water and carbon dioxide using the sunlight energy. Plants are green because they contain a lot of chlorophyll which is a green pigment which traps sunlight for photosynthesis, plants are autotrophic organisms, they make their own food. Plant cells contain a large vacuole, a nucleus, chloroplasts and a cell wall made of cellulose, cell walls are not present in animal cells.

The Plants Kingdom contains several different phyla, but we will discuss only one of them, which is flowering plants or Angiosperms.

The difference could also be told by looking at the leaves of both flowers, you find that monocots have long sharp leaves with parallel veins, and dicots have leaves with branching veins.

The animal kingdom is divided into two groups, vertebrates and invertebrates. To study this kingdom study the following tables.