A cell is the smallest unit that can carry on all the processes of life.
All organisms are made of cells, organisms are made of several organ systems, each organ system contains several organs, each organ contains several tissues; each tissue is made of cells. Cells are very tiny they could be seen only through a microscope. We have two types of cells: 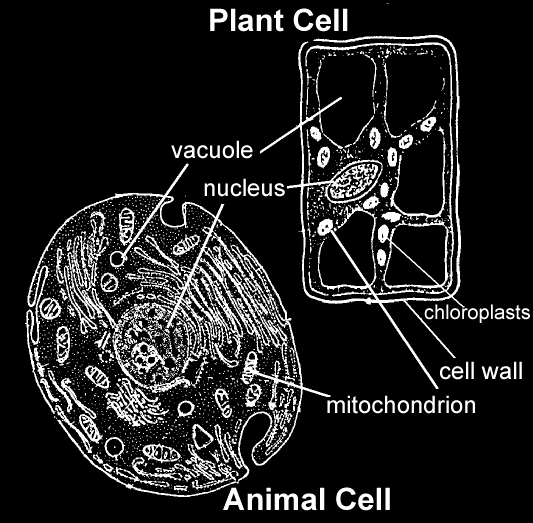 As you can see from the diagram, there are some features found in plant cells but not in animal cells.


Features found in both plant and animal cells:

Features found in only plant cells:

Both types of cells contain Mitochondria these are structures that convert chemical energy in foods to energy that could be used in moving, dividing, etc., it is evidence that the cell is an Active Cell.

They are adapted by four ways:

They are adapted by two ways, First, Is that they are made of contractile filament to help in contraction. Second is it contains lots of mitochondria to supply the cell with energy.

Ciliated cells are present in the trachea and bronchi of out respiratory system.

Their function is to use their cilia to move the mucus up the trachea to the throat. The mucus traps bacteria and dust particles. When it reaches the throat, mucus is swallowed to the stomach where the acid kills the bacteria.

The mucus is secreted by goblet cells which are next to ciliated cells.

These are dead lignified cells that exist in the stem of a plant.

Their function is to transport water and minerals from the roots to the leaves and the rest of the plant through the stem. And to support the plant.

They are adapted by 2 ways. Firstly, they are hollow to allow water and minerals to pass through them with no resistance. Secondly they are strong and lignified to support the plant.

The Division Of Labour: the specialization of cells to carry out particular functions in an organism.