Animals eat to grow, repair etc. They simply eat to live. In this unit we will study how animals make use of what they eat. The journey of the food from the mouth to the anus through the alimentary canal includes 5 steps:

*Don’t confuse egestion with excretion, excretion is to get rid of waste products of metabolism.

The alimentary canal (gut or digestive tract) is made up of several organs working together to perform all the processes mentioned above. Starting with the mouth and ending with the anus. 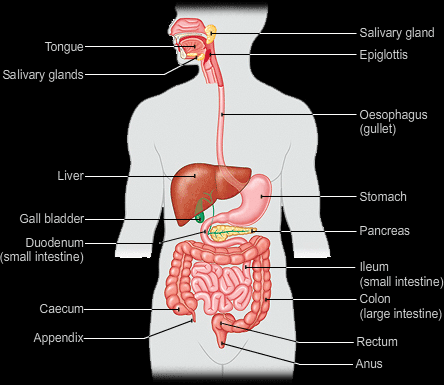 Mechanical Digestion: The action of the teeth biting a small piece of food from a large one is considered mechanical digestion, the teeth also tears and grinds the food into a bolus to give it larger surface area for faster chemical digestion.

Chemical Digestion: beneath the tongue lies a salivary gland which secrets saliva into the mouth, this saliva contains water and mucus to lubricate the food bolus and amylase enzyme that breaks down starch in the food into maltose.

After this the tongue pushes the food bolus into the oesophagus.

Here the food stays for a while. The stomach is a flexible bag that performs both mechanical and chemical digestion.

Mechanical Digestion: The walls of the stomach contain muscles that contract and relax together mixing the food with the content of the stomach and turning it into liquid chyme, this process is called churning.

Chemical Digestion: The walls of the stomach also secretes a liquid called “Gastric Juice” which contains Hydrochloric acid, Mucus, and pepsin enzyme. The pepsin enzyme digests proteins into simpler polypeptides, while the hydrochloric acid is to provide optimum pH for the enzyme and the mucus is to lubricate the food and protect the walls of the stomach from the acid.

After a few hours, the sphincter which is a muscular valve opens allowing the food into the small intestine.

The small intestine is where most digestion and absorption takes place. It is divided into two sections, duodenum and ileum. The walls of the small intestine contain several types of liquids that help in providing suitable conditions and digest the food. These liquids are:

Bile Juice: it comes from the liver, stored in the gall bladder. It is squirted along the bile duct in the duodenum. The bile works on fats only, fats are very difficult to digest because they are very insoluble, the bile contains bile salts that breaks fats into tiny droplets that float in the content of the small intestine, making it easier for the lipase to digest fats into fatty acids and glycerol, this process is called emulsification.

Pancreatic Juice: it comes from the pancreas and secreted along the pancreatic duct. It contains enzymes and sodium hydrogen carbonate, which neutralises the hydrochloric acid that was added to the food in the stomach, creating better conditions for the enzymes to work. The pancreatic juice contains the following enzymes:

Small intestine liquid: The small intestine itself also secrets a liquid that consists of lots of enzymes to make sure carbohydrates, fats and proteins are digested to their simplest form, these enzymes are:

Each villi has a branch of blood capillaries in it as well as a lacteal which is a lymph vessel, the lacteal absorbs fats and lipids with vitamins dissolved in them into The lymphatic system.

By the time the food reaches the large intestine, there is not much left of it, only some water, minerals, and fibers. The water and the minerals are absorbed into the blood, while the fibers and dead cells of the alimentary canal are stored in the rectum then excreted through the anus (egestion).

Assimilation Of The Absorbed Food Molecules:

After the food molecules are absorbed from the alimentary canal, it is transported to the liver by a special blood vessel called The Hepatic Portal Vein. The liver is an organ that is considered a gland too. It carries out several jobs to “sort out” the food molecules it receives. Each type of nutrient has its own fate in the liver.

Glucose: when the absorbed glucose reaches the liver, the liver allows as much as needed by the body to pass to the circulatory system to by used for respiration or other processes. The excess glucose is converted to glycogen and stored in the liver cells, when the blood is short in glucose, glycogen will be converted back into glucose and secreted to the blood. Some glucose will also be converted to fats as an energy reserve. These functions are controlled by the Insulin and Glucagon hormones which are made in the pancreas.

Amino Acids: some amino acids will be used by the liver cells to make proteins, the rest will be allowed into the blood stream to be absorbed by the body cells which also convert it to proteins. If the body contains enough amino acids, the excess will undergo a process called Deamination, this involves the break down of amino acids into carbohydrates and amino group, which is then converted to ammonia then converted into urea, which is part of the waste product of the body, urine.

A part from sorting out food molecules, the liver performs the following jobs too: