Displacement (y): Position of an oscillating particle from its equilibrium position.

Amplitude (y0 or A): The maximum magnitude of the displacement of an oscillating particle from its equilibrium position.

Period (T): Time taken for a particle to undergo one complete cycle of oscillation.

Frequency (f): Number of oscillations performed by a particle per unit time.

Wave speed (v): The speed at which the waveform travels in the direction of the propagation of the wave.

Wave front: A line or surface joining points which are at the same state of oscillation, i.e. in phase, e.g. a line joining crest to crest in a wave.

Intensity {of a wave}: is defined as the rate of energy flow per unit time {power} per unit cross-sectional area perpendicular to the direction of wave propagation.

For a point source (which would emit spherical wavefronts),

For all wave sources, I ∝ (Amplitude)2

A wave in which the oscillations of the wave particles {NOT: movement} are perpendicular to the direction of the propagation of the wave. 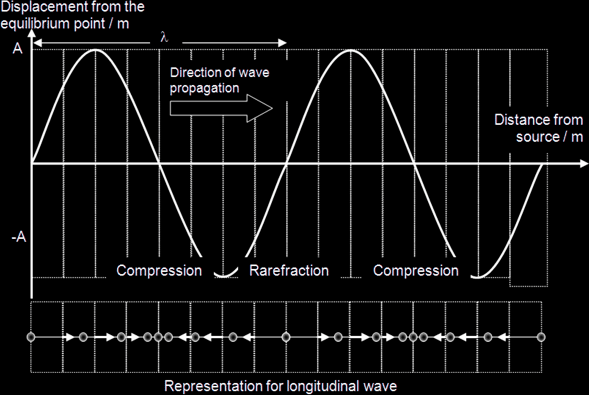