Principle of Superposition: When two or more waves of the same type meet at a point, the resultant displacement of the waves is equal to the vector sum of their individual displacements at that point.

A horizontal rope with one end fixed and another attached to a vertical oscillator. Stationary waves will be produced by the direct and reflected waves in the string.

Or we can have the string stopped at one end with a pulley as shown below.

A microwave emitter placed a distance away from a metal plate that reflects the emitted wave. By moving a detector along the path of the wave, the nodes and antinodes could be detected.

A tuning fork held at the mouth of a open tube projects a sound wave into the column of air in the tube. The length of the tube can be changed by varying the water level. At certain lengths of the tube, the air column resonates with the tuning fork. This is due to the formation of stationary waves by the incident and reflected sound waves at the water surface. 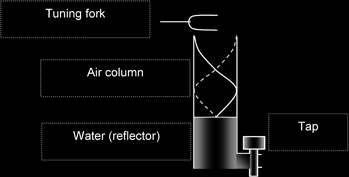 Stationary (Standing) Wave) is one

A stationary wave is formed when two progressive waves of the same frequency, amplitude and speed, travelling in opposite directions are superposed. {Assume boundary conditions are met}

Node is a region of destructive superposition where the waves always meet out of phase by π radians. Hence displacement here is permanently zero {or minimum}.

Antinode is a region of constructive superposition where the waves always meet in phase. Hence a particle here vibrates with maximum amplitude {but it is NOT a pt with a permanent large displacement!}

Diffraction: refers to the spreading {or bending} of waves when they pass through an opening {gap}, or round an obstacle (into the “shadow” region). {Illustrate with diag}
For significant diffraction to occur, the size of the gap ≈ λ of the wave

Diffraction refers to the spreading of waves as they pass through a narrow slit or near an obstacle.

For diffraction to occur, the size of the gap should approximately be equal to the wavelength of the wave. 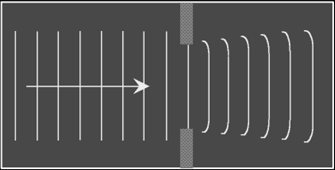 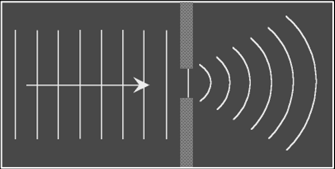 Interference may be described as the superposition of waves from 2 coherent sources.

For an observable / well-defined interference pattern, the waves must be coherent, have about the same amplitude, be unpolarised or polarised in the same direction, & be of the same type.

Microwave emitted from a transmitter through 2 slits on a metal plate would also produce interference patterns. By moving a detector on the opposite side of the metal plate, a series of rise and fall in amplitude of the wave would be registered. 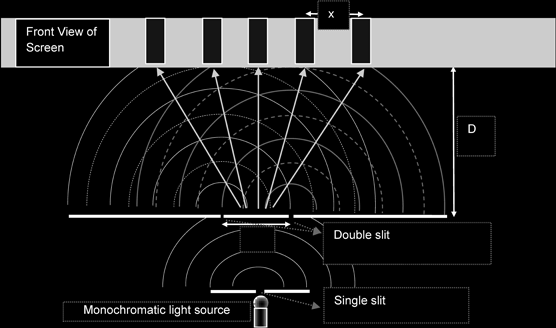 Since light is emitted from a bulb randomly, the way to obtain two coherent light sources is by splitting light from a single slit.

The 2 beams from the double slit would then interfere with each other, creating a pattern of alternate bright and dark fringes (or high and low intensities) at regular intervals, which is also known as our interference pattern.

Condition for Constructive Interference at a pt P:

Condition for Destructive Interference at a pt P:

Phase difference Δφ betw the 2 waves at any pt X {betw the central & 1st maxima) is (approx) proportional to the dist of X from the central maxima.

Using 2 sources of equal amplitude x0, the resultant amplitude of a bright fringe would be doubled {2x0}, & the resultant intensity increases by 4 times {not 2 times}. { IResultant ∝ (2 x0)2 }