Period: is defined as the time taken for one complete oscillation.

Frequency: is defined as the number of oscillations per unit time,

Angular frequency ω: is defined by the eqn, ω = 2 π f. It is thus the rate of change of angular displacement (measured in radians per sec)

Amplitude: The maximum displacement from the equilibrium position.

Simple harmonic motion: An oscillatory motion in which the acceleration {or restoring force} is 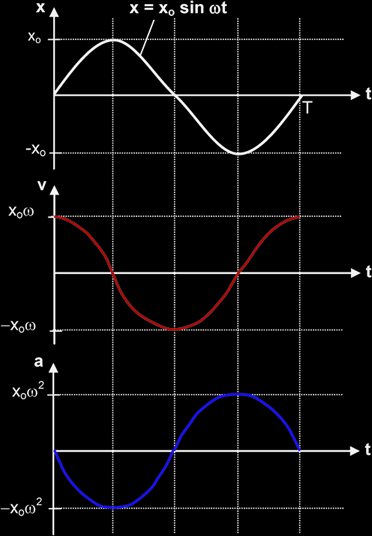 The energy of the oscillator changes from potential to kinetic and back to potential in every half-cycle interval. At any point of its motion, the sum of the PE and KE is equal to the total energy. At the equilibrium position, the mass has a maximum KE because its speed is greatest and zero PE as the spring neither compressed nor stretched. At either A or B where the mass stops, its KE is zero while its PE is maximum.

The constant interchange of energies during SHM can be represented graphically as follows. 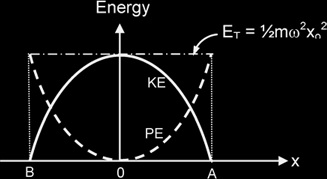 It can be shown that

Damping: refers to the loss of energy from an oscillating system to the environment due to dissipative forces {eg, friction, viscous forces, eddy currents}

Light Damping: The system oscillates about the equilibrium position with decreasing amplitude over a period of time.

Critical Damping: The system does not oscillate & damping is just adequate such that the system returns to its equilibrium position in the shortest possible time.

Heavy Damping: The damping is so great that the displaced object never oscillates but returns to its equilibrium position very very slowly.

Free Oscillation: An oscillating system is said to be undergoing free oscillations if its oscillatory motion is not subjected to an external periodic driving force. The system oscillates at its natural freq.

Resonance: A phenomenon whereby the amplitude of a system undergoing forced oscillations increases to a maximum. It occurs when the frequency of the periodic driving force is equal to the natural frequency of the system. 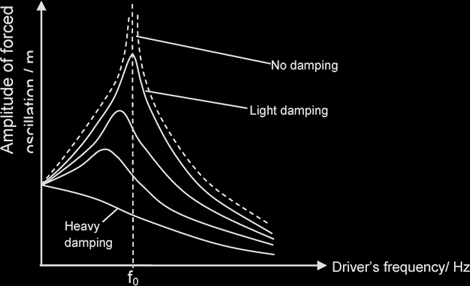 Examples of Useful Purposes of Resonance

Examples of Destructive Nature of Resonance