Experimental evidence for a small charged nucleus in an atom: 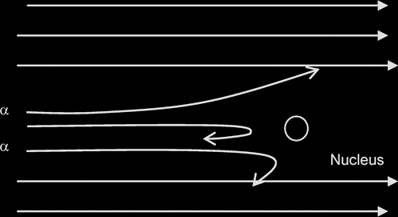 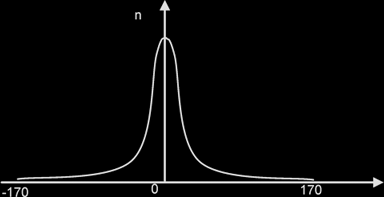 Most of the α-particles passed through the metal foil were deflected by very small angles.

A very small proportion was deflected by more than 90°, some of these approaching 180°

From these 2 observations it can be deduced that: the nucleus occupies only a small proportion of the available space (ie the atom is mostly empty space) & that it is positively charged since the positively-charged alpha particles are repelled/deflected.

Nucleon: A particle within the nucleus; can be either a proton or a neutron

Proton number Z {old name: atomic number}: No. of protons in an atom

Nucleon number N {mass number}: Sum of number of protons and neutrons in an atom

Isotopes: are atoms with the same proton number, but different nucleon number {or different no of neutrons}

B.E. per nucleon is a measure of the stability of the nucleus.

Mass Defect: The difference in mass between a nucleus and the total mass of its individual nucleons

In both nuclear fusion and fission, products have higher B.E. per nucleon {due to shape of BE per nucleon-nucleon graph}, energy is released {not lost} and hence products are more stable.

Nuclear fission: The disintegration of a heavy nucleus into 2 lighter nuclei. Typically, the fission fragments have approximately the same mass and neutrons are emitted.

Fig below shows the variation of BE per nucleon plotted against the nucleon no. 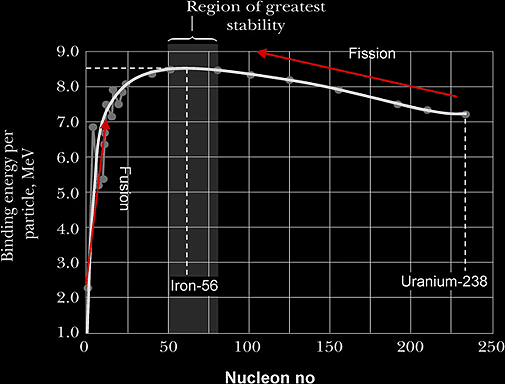 Warning!!! Graph is NOT symmetrical.

Principle of Conservation of Energy-Mass:

Spontaneous: The emission is not affected by factors outside the nucleus

Random: It cannot be predicted when the next emission will occur {Evidence in fluctuation in count-rate}

Decay law: dN/dt = -λN, where N= No. of undecayed {active} nuclei at that instant;

Background radiation refers to radiation from sources other than the source of interest.

Decay constant λ is defined as the probability of decay of a nucleus per unit time {or,the fraction of the total no. of undecayed nuclei which will decay per unit time}

Activity is defined as the rate at which the nuclei are disintegrating; A = dN/dt = λN

where, Mass of 1 mol of nuclide= Nucleon No {or relative atomic mass} expressed in grams {NOT: in kg!!}

Application of PCM to radioactive decay:

Half-life is defined as the average time taken for half the number {not: mass or amount} of undecayed nuclei in the sample to disintegrate,

or, the average time taken for the activity to be halved.

Radiation damage to biological organisms is often categorized as: somatic and genetic.

Somatic damage refers to any part of the body except the reproductive organs.
Somatic damage harms that particular organism directly. Some somatic effects include radiation sickness (nausea, fatigue, and loss of body hair) and burns, reddening of the skin, ulceration, cataracts in the eye, skin cancer, leukaemia, reduction of white blood cells, death, etc.

Genetic damage refers to damage to reproductive organs.
Genetic effects cause mutations in the reproductive cells and so affect future generations – hence, their effects are indirect. (Such mutations may contribute to the formation of a cancer.)