When a conductor carrying a current is placed in a magnetic field, it experiences a magnetic force.

The figure above shows a wire of length L carrying a current I and lying in a magnetic field of flux density B. Suppose the angle between the current I and the field B is θ , the magnitude of the force F on the conductor is given by

The direction of the force can be found using Fleming‟s Left Hand Rule (see figure above). Note that the force is always perpendicular to the plane containing both the current I and the magnetic field B.

Example
The 3 diagrams below each show a magnetic field of flux density 2 T that lies in the plane of the page. In each case, a current I of 10 A is directed as shown. Use Fleming's Left Hand Rule to predict the directions of the forces and work out the magnitude of the forces on a 0.5 m length of wire that carries the current. (Assume the horizontal is the current)

{NB: write down the above defining equation & define each symbol if you're not able to give the “statement form”.}

Example
A 100-turn rectangular coil 6.0 cm by 4.0 cm is pivoted about a horizontal axis as shown below. A horizontal uniform magnetic field of direction perpendicular to the axis of the coil passes through the coil.

Initially, no mass is placed on the pan and the arm is kept horizontal by adjusting the counter-weight. When a current of 0.50 A flows through the coil, equilibrium is restored by placing a 50 mg mass on the pan, 8.0 cm from the pivot. Determine the magnitude of the magnetic flux density and the direction of the current in the coil. 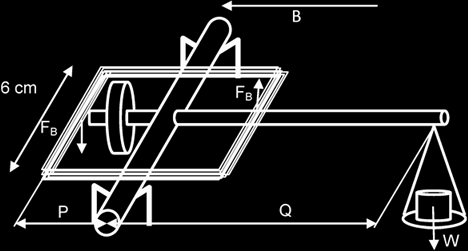 The direction of this force may be found by using Fleming's left hand rule.
The angle θ determines the type of path the charged particle will take when moving through a uniform magnetic field:

Since F is always be perpendicular to v {even if θ ≠0},
the magnetic force can provide the centripetal force, → Bqv = mv2 / r

Example:
An electron moves in a circular path in vacuum under the influence of a magnetic field.

(i) whether the motion is clockwise or anticlockwise:
The magnetic force on the electron points towards the centre of the circular path; hence using Fleming's left hand rule, we deduce that the current I points to the left. The electron must be moving clockwise.

Crossed-Fields in Velocity Selector:
A setup whereby an E-field and a B-field are perpendicular to each other such that they exert equal & opposite forces on a moving charge {if the velocity is “a certain value”}

Each conductor should thus experience a force (F = BIL sinθ), either of attraction or repulsion, depending on the direction of the currents. Whether the forces are attractive or repulsive can be predicted using the Right hand grip rule and Fleming‟s left-hand rule.

Example:
A long length of aluminium foil ABC is hung over a wooden rod as shown below. A large current is momentarily passed through the foil in the direction ABC, and the foil moves.

(i) Draw arrows to indicate the directions in which AB and BC move
Since currents in AB and BC are 'unlike' currents (they are flowing in opposite directions), the two foil sections AB and BC will repel each other.

(ii) Explain why the foil moves in this way
The current in the left foil AB produces a magnetic field in the other (BC). According to the Right Hand Grip Rule & Fleming‟s Left Hand Rule, the force on BC is away from and perpendicular to AB. By a similar consideration, the force on AB is also away from BC. Thus the forces between the foils are repulsive.