Electromagnetic induction refers to the phenomenon where an emf is induced when the magnetic flux linking a conductor changes.

Magnetic Flux is defined as the product of the magnetic flux density and the area normal to the field through which the field is passing. It is a scalar quantity and its S.I. unit is the weber (Wb).

The Weber is defined as the magnetic flux if a flux density of one tesla passes perpendicularly through an area of one square metre.

Example:
A magnetic field of flux density 20 T passes down through a coil of of wire, making an angle of 60° to the plane of the coil as shown. The coil has 500 turns and an area of 25 cm2. Determine:

Magnetic Flux Linkage is the product of the magnetic flux passing through a coil and the number of turns of the coil.

And when the switch S is opened, the galvanometer needle moves to the other side momentarily.

At the instant when switch S is either opened or closed, there is a change in magnetic flux in coil A.

Factors affecting the magnitude of the induced E.M.F.:

When the magnet is moved, its field lines are being “cut” by the coil. This generates an induced EMF in the coil that produces an induced current that flows in the coil, causing the deflection in the ammeter.

The magnitude of the deflection depends on the magnetic field density B, the speed of motion v of the magnet, and the number of turns N in the coil.

Faraday's Law
The magnitude of induced EMF is directly proportional/equal to the rate of change of magnetic flux-linkage.

Example
Explain how Lenz's Law is an example of the law of conservation of energy:
{Illustrate with diagram of a coil “in a complete circuit”, bar magnet held in hand of a person (= external agent)}

For a straight conductor “cutting across” a B-field: E = B L v sin θ

For a coil rotating in a B-field with angular frequency ω:

{Whether φ = BAsinωt, or = BAcosωt, would depend on the initial condition} 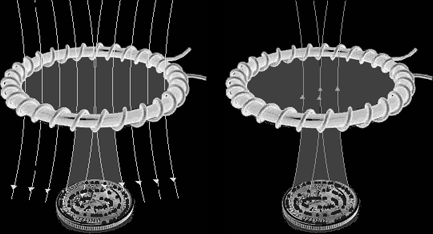 Electric guitars use electromagnetic pickups in which an induced emf is generated in a coil of wire by a vibrating string. Most guitars have at least two pickup coils located below each string. Each pickup is sensitive to different harmonics produced by the vibrating string. The string is made from a magnetisable metal, and the pickup consists of a coil of wire within which a permanent magnet is 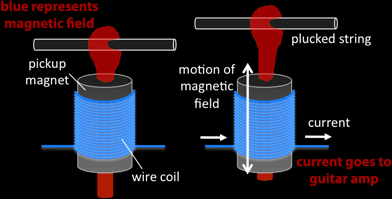 located. The permanent magnet produces a magnetic field that penetrates the guitar string, causing it to become magnetized with north and south poles. When the string is plucked, it oscillates, thereby changing the magnetic flux that passes through the coil. The changing magnetic flux induces an emf in the coil, and the polarity of this emf alternates with the vibratory motion of the string. A string vibrating at 440 Hz, for example, induces a 440-hz ac emf in the coil. This signal, after being amplified, is sent to the speakers, which produce a 440-Hz sound wave.

ELCB is used in electrical circuits in the home to protect the users from electric shocks when there is a fault in the electrical appliance. The ELCB can be triggered to stop a current, depending on whether an induced voltage appears across a sensing coil.

The sensing coil is wrapped around an iron ring, through which the current carrying wire passes. Under normal operating conditions, the current flowing in the coils A and B are equal but opposite directions. The magnetic field produced by both coils will always be equal and opposite, hence cancelling out each other at the secondary or sensing coil. The situation changes when there is a leakage in the electrical appliance, where the current returning is smaller than the current going into the appliance. Under this condition, the net magnetic field through the secondary coil is no longer zero and changes with time, since the current is ac. The changing magnetic flux causes an induced voltage to appear in the secondary coil, which triggers the circuit breaker to stop the current. ELCB works very fast (in less than a millisecond) and turn off the current before it reaches a dangerous level.

Consider a metal disk rotating clockwise through a perpendicular magnetic field but confined to a limited portion of the disk area. (Compare this with the Faraday‟s disk earlier)

Sector Oa and Oc are not in the field, but they provide return conducting path, for charges displaced along Ob to return from b to O. The result is a circulation of eddy current in the disk. The current experiences a magnetic force that opposes the rotation of the disk, so this force must be to the right. The return currents lie outside the field, so they do not experience magnetic forces. The interaction between the eddy currents and the field causes a braking action on the disk.