Public expenditure in the UK

What determines the size of public expenditure?

• Where the country is in the economic cycle – if we are in recession (around the floor or trough in the diagram below) the government may choose to spend more and increase the “G” component of aggregate demand (consumption + investment+ government) thus pushing out the aggregate demand curve. 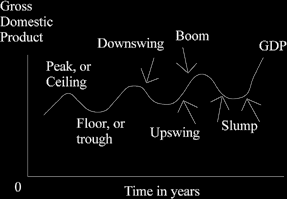 This is shown in the diagram below. 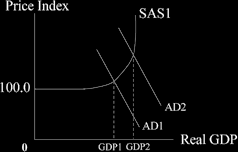 Conversely if we are in a boom, the government may choose to spend less, reduce the “G” component of aggregate demand and pull back the aggregate demand curve, thus reducing public expenditure. You can see the results in the diagram below. The level of gross domestic product falls from GDP1 to GDP2 and the rate of inflation falls from P1 to P2. 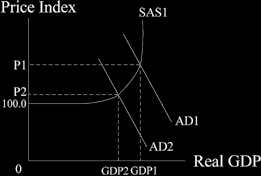 • If the government fears there is about to be an international recession or believes there could be events that could lead to a downturn or downswing, they might increase spending to offset it. There might, say, be a fear that investment or consumption is about to fall.

• The government gets elected on its policies. If their manifesto stated they would increase expenditure and solve certain problems, perhaps for instance to fix the transport system, then they really should be spending if democracy is to mean anything.

• The government’s general attitude, e.g., Old Labour taxes and spends more than
New Labour or than the Conservative Party.

The budget deficit or surplus

If the budget is in deficit, it means that public expenditure exceeds government revenue which comes largely from taxation. The government may have to borrow to cover the difference.

It is acceptable to run a budget deficit, if for instance, the government is deliberately trying to increase the level of aggregate demand, expand the economy, and lead us into an upswing. The policy of the current Chancellor of the Exchequer, Gordon Brown, is to balance the deficits and surpluses over the whole economic cycle but he does not aim to do so in any one year.

The “public sector net cash requirement” (PSNCR) is what the government must borrow in order to fill the deficit gap. The gap, if any, includes the total accounts of the central government, local governments and the public corporations.

How is the PSNCR measured?

• The nominal PSNCR is the simple addition of the financial accounts of the above three sectors.

• The seasonally adjusted PSNCR takes account of our place in the economic cycle
– the deficit and PSNCR increases naturally in a recession because the government is paying out more to the unemployed and at the same time, tax revenue is lower owing to the lessened economic activity.

• The PSNCR as a percentage of GDP is a useful measure;

o it helps us to judge how “large” it is in context;
o and also to compare our situation with that in other countries. We keep our eye on the other EU countries in particular.

There are both advantages and disadvantages in the government borrowing money. All governments do it!

• By borrowing and building things like roads, bridges, and docks (known as social overhead capital) and providing better education or health for the people it can speed up future economic growth. This will make it easier to pay back what is being borrowed now, as well as what was borrowed in the past, because society will be richer.

• The extra expenditure (“G”) might prevent a fall in national income and so the government will not forgo the tax revenue it would otherwise have lost, or have to spend more on the unemployed.

• Borrowing prevents the government from having to raise taxes now.
Governments that increase the rate of tax tend not to be popular and the government wishes to be re-elected!

• When the government borrows it tends to increase the rate of interest rate offered and this might crowd-out private investment. Those who save might divert their savings towards the government and away from industry or the banks (who lend it to industry). A reduction in investment can harm future growth prospects.

• The sum borrowed has to be repaid (or else the level of national debt increases, which is in itself not particularly bad). If the government raises taxes to do this, not only will it be unpopular, it would reduce consumption and the standard of living, and might reduce investment which could be detrimental to long term growth.

• When the government repays its earlier borrowings, whatever sum it repays cannot then be spent on what is deemed important at that time.

• To some extent, the disadvantages and advantages depend on what the government decides to spend the borrowed money on and how effectively it spends it.

The Chancellor Gordon Brown decided that it is safe and desirable for the government to borrow in order to spend on investment for the future, but not to borrow to cover current consumption. He believes that the consumption component of government expenditure must be financed by taxation.

He also tries to balance out borrowing and spending over the economic cycle, so the government can borrow for a few years of recession but should then pay it back in times of boom.

Generally, when a government wishes to redistribute income it prefers this to be towards the poor rather than the rich, and it often does this via the social security system.

The problems with trying to redistribute income include:

• The really poor, sleeping in doorways etc, may not know about the benefits that are available or even qualify for them (a fixed address may be required for instance) so they do not benefit from the intended redistribution. The neediest people can miss out.

• The sheer complexity of the rules mean that many who qualify do not apply for state benefits – so the poor and aged do not get all they should. This is a widely recognised problem that still awaits solution. Some other people, often the elderly who were brought up to fear “accepting charity”, may refuse on principle to take a handout from the state, even when desperately poor. The means test in order to determine exactly how poor they are also deters some, perhaps many.

• The middle class tends to be good at getting its share because is educated and vocal, when compared with those at the bottom end of society.

• The rich tend to be able to avoid a lot of income tax, and other taxes, in a variety of ways. They are able to buy the advice of experts, set up trusts, live abroad for part of the year and avoid tax, or simply conceal the income they obtain. The true burden of taxation often seems to fall on the group in the middle rather than the richer top end of society.

• A special problem is that governments have a tendency to subsidise groups which are seen for some reason as desirable, whether the members are rich or poor. Farmers are a particular example of this, where extremely poor hill farmers in Wales receive a subsidy and so do the large, rich farms owned by millionaire families who use managers rather than sweat themselves.

• Government may also change the tax system to favour a particular group e.g., to increase or reduce the help for those paying mortgages. Such action alters income distribution.

• Logic suggests that we should not subsidise groups at all, but should simply identify the poor and those who need help - and then help them. Subsidising the rich seems bizarre and wrong. Subsidising things rather than people seems peculiar, e.g. council houses, but this is done and rarely questioned. The result is an anomalous situation where many really poor are excluded from the benefits of cheap public housing, and some recipients of it are now moderately wealthy but are still subsidised.

• In the United States under President Bush, many rich people have received substantial windfall income increases owing to changes in the tax system apparently designed to benefit the wealthy. It is uncommon in Britain for governments to alter the rules to favour the rich rather than the poor, although Prime Minister Thatcher did this.

• It is perhaps more common for lethargy or inaction to allow the rich to be
favoured. As an example, the current Labour government has refused to increase the rates of income tax on the rich. Further inaction has maintained the cut-off points in the tax system, so that many quite ordinary people who might be described as “comfortable” rather than rich have now moved up into the top rate tax bracket.

• As a further example in the UK, governments for a long time have refused to close certain legal loopholes that favour the rich, such as the current rules that allow low rates of income tax for those living in the Channel Islands. Naturally,
the millionaire population of these islands is well above average, as large numbers
of rich people have moved to live there in order to preserver their wealth and avoid paying taxes to help run the country.